In 2010, I attended His Holiness the Dalai Lama’s teachings on the Heart Sutra.  At the close of his first teaching, he gave those attending a contemplative focus for the remainder of the day.  Our practice was to focus upon the following thought:

As I reflected upon the teachings of the day, I settled on the mantra, “I am emptiness, Emptiness I Am.”  These words seemed to unite the Dalai Lama’s comprehension of the scripture with my own, merging the two into a whole thought, much like the union of Avalokitesvara and Kuan Yin.  The fruit of this marriage made in heaven came in the form of a dream that reflects the consciousness Avalokitesvara symbolizes. 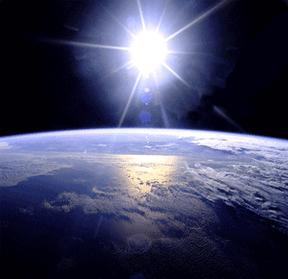 I see the expanse of water stretching before me.  It reminds me of flying over the Pacific Ocean between the U.S. and Australia.  My vantage point is above the water yet close enough to it to see the changes it allows.  The interplay of wind and water is what impresses me.  Sometimes the water is churning, turning over into itself, as if wrestling with its own reality as the wind whips it up into large waves.

Then all is quiet, and the water settles, becoming a looking glass where I can see light strike the surface and return into space, illuminating the depths of the water.  In the stillness, eddies can be seen, whirlpools that draw everything into the center as if there is a hole in the earth that will swallow everything.  All the interplays between wind, water, and light are before me and I am captivated.  I hear a professorial voice, male, saying,

“In the beginning God created the heavens and the earth.  The earth was without form and an empty waste, darkness was upon the face of the deep.  The Spirit of God was moving over the face of the waters.  And God said, Let there be light; and there was light.”

I hear chanting, repetition of sound, and the whirr of prayer wheels.  “How long must one suffer?”  The question arises and floats in the air.  “As long as deemed necessary for change to be accepted” is my answer.  EOD

Avalokitesvara symbolizes the experience, beyond the boundaries of the physical senses, of emptiness.  This is a place of accepting What Is.

It is the moment of singular-pointed attention, complete focus that poises the Mind so the Self can see clearly what has come to pass.  “He who observes the sounds of the world” does not interfere of his own volition, by his own preference or bias.  Awake and aware, he waits, attending to any who call upon him.  He is the Savior, mastering chronological cause and effect time, by observing his experiences rather than becoming caught up in them.  He is the teacher, shining his light to note the effects of the wind on the waters.• – from The Taraka Yoga of Kuan Yin