What is Taraka Yoga?

Taraka Yoga is a system of divination focusing the Spirit, Mind, and Body for Self transformation.   It unites schools of thought and traditions of practice throughout time and space.   The word yoga is often translated as union, specifically union with the Divine.  Taraka means rescuing or liberating; causing to cross over.  Taraka Yoga began as an evolution of the Psi Counseling Program I was teaching in 1999 at the College of Metaphysics in the United States.  Its first widespread application was to aid people to respond to their own and others’ distress, fear, and hatreds inflamed by the destruction by terrorists of the Twin Towers in New York City on September 11, 2001.
Although I understood Taraka Yoga’s connections with the East through the seven paths of yoga, I did not yet realize the depth of its integration with Buddhist traditions until now.  The purpose of the Bodhisattva is to assist in “crossing over” from the Tomb World of physically-based, brain-thinking only to the Pure Land of Mind where the light of consciousness illuminates reality.  The Taraka Yoga presented here is designed to produce the Bodhisattva consciousness in your thinking.
Anytime that we are called upon to aid another, the greatest power we possess is our capacity to receive them, to listen.  The yearning to be heard, to be validated in this manner, is strong for it is the vehicle for the human spirit to make itself known.  Receiving another is an act of compassion.  Listening to them is an act of love.
There are many applications of Taraka Yoga.  The transition from the physical world into the spirit world, the release of the physical body at the time of death, holds great mystery for most people.  The more that one understands the mind, the inner levels of one’s consciousness, the more inclined they are to personally attend someone who’s in a period of transition.  We do not have to wait, nor should we wait, for physical death to evaluate the quality of our thoughts.  Those thoughts create our existence, the world we live in.  They can be evaluated for their integrity and truthfulness in any given moment.
Building upon thoughts created in light and love change those in darkness.  Lif 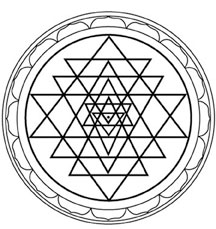 e becomes a dream in the making.  When someone aids another to interpret a dream, that is an act of Taraka Yoga.  It is a way to encourage unification of the consciousness in the individual, and to see value and meaning in rapport between the outer Conscious  that receives the dream and the inner Subconscious  which gives it.  For this reason, you will find the dream language referenced in this yoga.
Concentration, meditation, and visualization are the mental capacities you will employ in your divination work.  I call these three mental skills the Crown Jewels of Consciousness.  When I chant Om Mani Padme Hum, these are the “jewels” I honor in the lotus.  I learned and practiced ways to develop mastery of these  abilities at the School of Metaphysics (SOM) in the United States.  SOM exists to aid any individual to become a whole, functioning Self for the purpose of accelerating the evolution of humanity as Spiritual Man.  In addition to daily practices with the Crown Jewels, students learn how to direct the physical body through breath, movement, form, and diet.  The Universal Language of Mind© is taught to quicken and deepen fluency in understanding and interpreting the energies that arise in the inner levels of consciousness.  This begins through dream recall and scribing, then progresses into lucid dreaming and experiencing on the inner planes through astral projection.  A unique factor to the study, is teaching teachers.  This is not seen as an end to the study, rather it is the gateway to true wisdom.  SOM provides a space to actively, thoughtfully, and consciously practice Self mastery through encouraging whole-ed interaction with others.  In this way, the student of consciousness answers the challenge to “Know thy Self”.   Taraka Yoga stems from these practical applications of ancient wisdom.
World teachings that endure, do so because they serve the whole.  They apply to anyone, anywhere, any time, and so they are passed on from generation to generation.  The beauty of what is occurring now in our world is the access to these global Truths.  No longer limited to our immediate sphere of culture and influence, technology has put the information of the world in the palm of our hands.  Taraka Yoga has its roots in this world database of truths that have been universally-tested for centuries.  Its flowering comes when these truths live through you.  The yoga inspires the Atman in you to come forward, breathing life into your creation.
–from The Taraka Yoga of Kuan Yin